Now, we’re cooking with gas. Or dragon fire. Or wildfire. Take your pick. Game of Thrones has long established a tendency to feature robust, standout episodes for the second slot of the season, and “Stormborn” continues that trend. This episode had no major flaws and just about every beat moved the narrative forward, in some cases monumentally so. The momentum, rhythm, and pace of the episode was consistent while still finding the time and restraint necessary to let crucial moments land.

At least as indicated by the first two episodes, something that seems to be emerging as a major theme this season is the breakdown of conventional wisdom and tradition. The dual events of Cersei laying waste to the seat of the state religion and Dany setting sail for Westeros ahead of large host of foreigners at the end of last season ushered in both the literal and symbolic destruction of the “old ways” that goes beyond just the balance of power on the surface of the central conflict. As resolute as the status quo and entrenched power may be, the plates are shifting at the core of Westerosi society and various aspects of conventional wisdom are breaking down. The major themes of this episode seemed to be change and progress.

Whereas the season premiere set the board up, so to speak, for the upcoming conflicts, the writers spent a great deal of time this episode planting the seeds for conflicts sure to blow up later as well as reigniting and turning the heat up on fissures that already exist between several of the characters. Not a lot of time was wasted getting to that point either, as the wonderfully tense opening sequence seemed to turn on a dime when Dany pivoted to grilling Varys. I was taken aback at first by Dany’s sharp turn to her line of questioning regarding Varys’ past allegiances until I realized that although they’ve shared screen time and been ostensibly in the same camp for some time now, we’ve never actually seen her address him until this point. About the only thing more enjoyable than watching Conleth Hill’s reactions is watching him deliver monologues, and that speech, which exists somewhere between Mr. Smith Goes To Washington, Aaron Sorkin, and Lawrence of Arabia, has to be in the Varys highlight reel.

My affection for Dany as a character and my affinity for her no-quarter policy leanings vis a vis slavery are fairly effective at causing me to forget my anti-monarchism when it comes to the question of her legitimacy as a ruler. She’s easy to root for when she’s executing slavers and marauding rapists in grand fashion, but now that she’s actually made landfall in a place she’s never lived, talking of ruling and conquering and claiming her “birthright,” I’m reminded of how flimsy I find her claim to Westerosi rule to be.

Several people have asked me whom I think will “win” the game of thrones, to which I always reply that while I immensely enjoy watching the warring factions vie for power, I don’t believe a true “winner” could emerge from all this because the system in place of attempting to rule the Seven Kingdoms from the Iron Throne is utterly unsustainable. Even if one were to “win” the game by conquering the entire territory by military force, to do so in the name of a “birthright” or familial vendetta would be an inherently despotic act, rendering one unfit to rule by any reasonable measure. To be sure, Dany is an improvement on Cersei in the social justice department, but she’d still basically be a petulant girl wanting all the toys to herself, especially if she does so with the assistance of a religious fanatic who burns little girls alive because she’s flattered that she might possibly sort of fit the description of a vague prophecy.

One of the things I appreciate about the Starks is that although they’re feudal lords benefiting from inheritance and autocracy, they do seem to posses some recognition that their legitimacy is ultimately inferred to them by their people. That is one of the many reasons it seems more than a little absurd to me that Dany would actually expect her nephew to swear fealty to her, as such, or allow a failure for Jon to do so as an excuse to forgo a vital and logical alliance with the North. Her proclamation that Jon Snow do so by “bending the knee” (which Tyrion seems to have wisely, strategically, and perhaps deceptively left out of his correspondence to the King In The North) alongside her grilling and threatening of Varys are both indications of her implacable hubris and entitlement, qualities (the former, at least), that served her well in the right doses, but when left unchecked lead to disaster (as they eventually do with every such figure in history). This is why she needs the likes of Tyrion and Varys, and will miss the council of Jorah and Barristan Selmy. Should she follow Olenna’s not altogether incorrect advice to disregard such council, her campaign may not go smoothly. 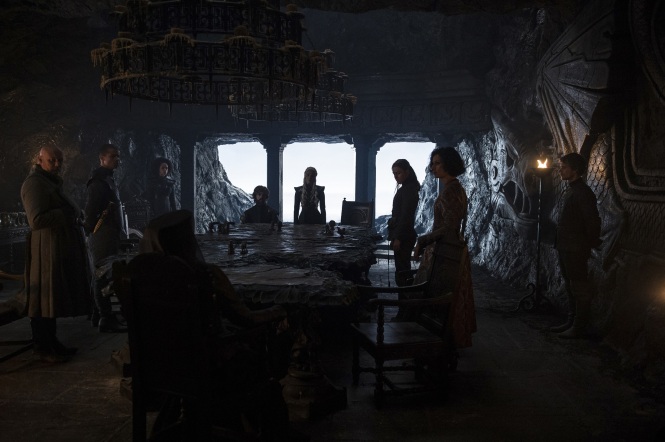 The Dragonstone war council scene itself was spectacular, if for no other reason than that we got to see all those characters in the same room after everything that’s happened and the way things have come together. Olenna is arguably the consummate “glue character” of the series; I can’t think of one sub-par storyline she’s been involved in. Furthermore, in the game of thrones of Game of Thrones cast members, Diana Rigg secured her victory a long time ago.

Though I don’t pretend to have any intimate knowledge or expertise on the physiology of castrati, I must say I’ve been surprised at the amount of people I’ve heard express the assumption that a eunuch couldn’t have a meaningful sex life. On that front, the Grey Worm and Missandei scene reminded me a bit of the sex scene between Jane Fonda and Jon Voight in Hal Ashby’s Coming Home, where Voight plays a quadriplegic Vietnam veteran and features the first and only serious sex scene featuring a disabled character that I can think of. It was a beautiful scene in an astoundingly great film. 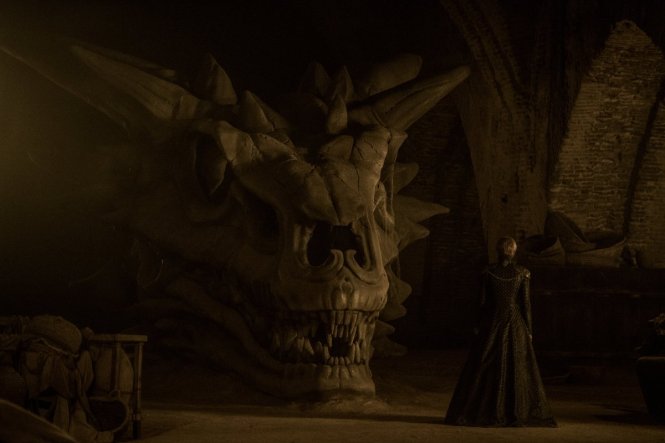 It’s fitting that the Lannisters are going full-nativist for their anti-Targearean strategy, because blaming immigrants, foreigners, others, has been a go-to for those in power from time immemorial. As exhilarating as it was to get a look at Balereon’s massive skull, I must say I expected a bit more than just heavy artillery from King’s Landing’s pre-eminent mad scientist in terms of his “solution,” as he put it, to defeat Dany’s dragons. Hopefully, this is a bit of misdirection on the show’s part, because you can’t exactly go from reanimation and wildfire to ballistas.

As much as I’d been hoping for Nymeria to reappear, the highlight of the Arya sequence for me was the scene with Hot Pie inside the inn. Maisie Williams played the scene with just the right amount of detachment while still clearly being happy to see Hot Pie. The way she snapped out of psycho killer mode when Hot Pie told her about Winterfell being back in Stark hands was also done just right in how there wasn’t a complete night and day shift in her demeanor, but you could see that a light came on in a room where it hadn’t in awhile, so to speak.

Until the conclusion, this episode was conspicuous for it’s relative lack of horrific events and so the bittersweetness of the Nymeria moment made for a fitting transition to the final sequence. Although the climactic battle itself was fairly unremarkable, the character elements were fantastic. As good an actor as Pilou Asbaek is, I must admit to finding Euron slightly tedious in previous episodes, mostly because he spent all his screen time talking himself up and not actually doing anything to back it up, almost like a bench player guaranteeing a win before a game. All such sentiments I harbored vanished in a single instant as he charged full-steam onto the deck of the ship swinging his axe like a maniac. I thought he was going to charge through the screen and into my apartment. It is now clear to me that Euron Greyjoy is exactly the man he continually boasted of being.

The Greyjoy triangle of Asbaek, Gemma Whelan, and Alfie Allen provided the perfect illustration of the tragedy of their storyline and how fucked up their family is. However unsurprised I was by Theon not accepting his uncle’s challenge with his blade to Yara’s throat, I didn’t expect him to go so far as to abandon ship rather than engage. For whatever reason it made the moment much more heartbreaking than if he had simply shelled-up or surrendered. His jumping overboard, Yara’s crestfallen expression in reaction, and Euron’s maniacal cackle made for one of the more effective endings I’ve seen in some time.