Of the myriad ruminating and analytical exercises I enjoy while engaging with Game of Thrones, one of my favorites is to consider the events of the series through the lens of modern political theory and dynamics, especially when it comes to the legitimacy of the leaders, a subject I’ve mentioned more than a few times in this space. I find the concept of legitimacy especially interesting where it concerns monarchy. While it is fairly clear what Dany’s personal motivations are for her quest for the Iron Throne, she’s never made an effective or legitimate case for her claim, and I do not believe it’s a coincidence. I think the reason she doesn’t have one is that she hasn’t developed a positive case to make for herself apart from her own personal drive and desire.

There is so much that’s interesting and compelling about putting Dany and Jon together after all this time, from both a narrative and practical standpoint. For one thing, we have two actors that however talented and well-cast they were from the start, have grown tremendously along side their characters. I’ve long been quick to defend Emilia Clarke and Kit Harington from their detractors, of which there are many, some with reasonable and legitimate arguments to support their position. I will admit that there has been a fair amount of material worthy of (at least good-natured) mocking in both their performances at times, but I’m also of the mind that most of what hasn’t quite clicked in either or both cases has had much more to do with the writing than in any fault in those two performers, as well-written as Game of Thrones is and has been. 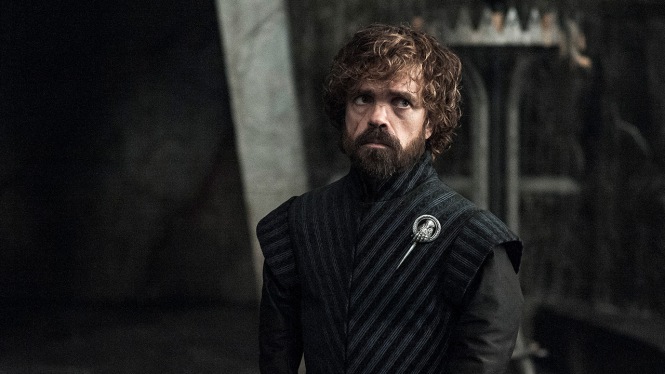 Having said all that, coming of age narratives can be difficult to pull off, and I would argue that these two actors, their characters, and the show have truly grown together. Beginning with this episode, we’re seeing that come to fruition. I haven’t done any math on this, but there’s no question that Dany, Jon, and Tyrion are the three characters given the most screen time and focus, and their paths have now finally converged. Just as Melisandre said in this episode, she’s “brought Ice and Fire together,” and though she may have been the catalyst, Tyrion is the link that binds them, the mediating force that allows them to coexist, at least until they strike a balance they can maintain between and amongst themselves. That or, you know…marriage.

Dany and Jon do indeed have a lot in common besides the “blood of the dragon.” They’re both fairly petulant, frequently (if not consistently) underestimated, and they’re both frequently ridiculed for being pretty. One of the starkest differences between them is how and why they’ve each had to prove themselves to their respective doubters and foes. Jon has had to prove to other and himself that he can rise above what’s expected of a bastard and Dany has had to demonstrate that she’s more than a spoiled little girl. Where Dany is entitled, Jon is resentful. 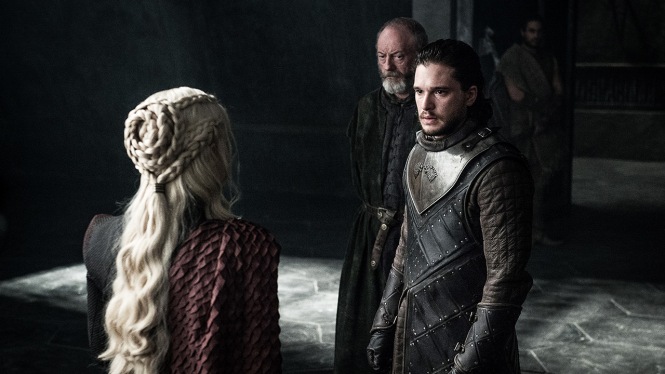 Their first meeting reminded me a lot of a political debate, and I watched it as such because, as I’ve alluded to previously, I need some convincing from the Breaker of Chains at this point in the game. Staying with the election analogies, Dany and Jon are both proficient in rally speeches, but Jon has proven himself a much better debater to this point because of the difference in his experience and temperament detailed above and this scene definitely bore that out. Not that he was ever going to convince Dany though, seeing as they are both exceptionally stubborn, yet another commonality they share.

The King’s Landing sequence was masterfully done, every scene of which was a reversal on a major event from earlier in the series, as Jaime aptly points out to Euron in reference to the mob that once assaulted Cersei now cheering on her ally and parading her latest prisoners of war down the same streets of King’s Landing en route to the Red Keep. The death of Ramsay has left something of a void in the sadistically entertaining psychopath department on the series that Pilou Asbaek has filled in seamlessly this season. Everything Euron did and said was distastefully hilarious. I’m beginning to think that the only reason I didn’t respond as much to Euron last season was that he was given no opportunity to cackle the way he has in this and the last episode. 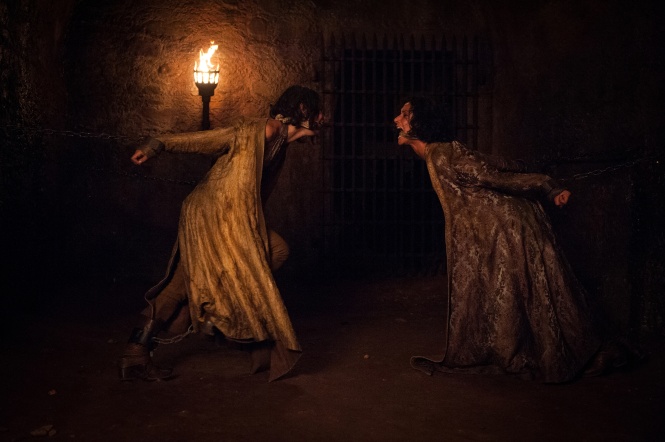 The most poetic reversal of the section and perhaps the entire episode was the exquisitely written and executed scene with Cersei, Ellaria, and Tyene in the dungeon cell. I feel like a broken record praising Lena Headey at this point, but her consistent excellence on this series cannot be ignored. This was an unquestionably brutal scene for a pathologically brutal character, but the hallmark of Headey’s brilliance is that she always plays other notes underneath her cruelty. The moment where she asked Ellaria “why did you do that?” in reference to Myrcella’s murder, her composure cracked just enough to reveal how painful it is for her. A lesser actor might have just played the anger over the death of her daughter and the villainy of her revenge, but that’s not what Headey does and that’s why Cersei has never gotten boring or completely unsympathetic.

I have some mixed feelings about the Bran situation in this episode. On the one hand, the same kind of detachment I touched on last week in reference to the Arya material seems to be even more at play with Bran and appropriately so, given what he’s been through and where he must be now as a character. As appropriate as it feels for his character though, it feels a bit undercooked relative to the larger narrative. I really think we’re missing a scene with Bran and Meera in between Cold Hands Benjen dropping them off at The Wall at the end of last season and them arriving at Winterfell in this episode. The only scene we’ve had with them was with Edd receiving them at the gate, where we get nothing from Bran besides him verifying his identity in the spookiest possible way. In the aforementioned Benjen scene, he was still “Bran with a burden,” now, we see him at Winterfell, and he seems to have gone full mystic. Again, I get it, its right, but I think we needed to have seen some type of transition or not have had the scene at the gate altogether. If this were simply the first time we saw him this season, I think we could have all put the pieces together. 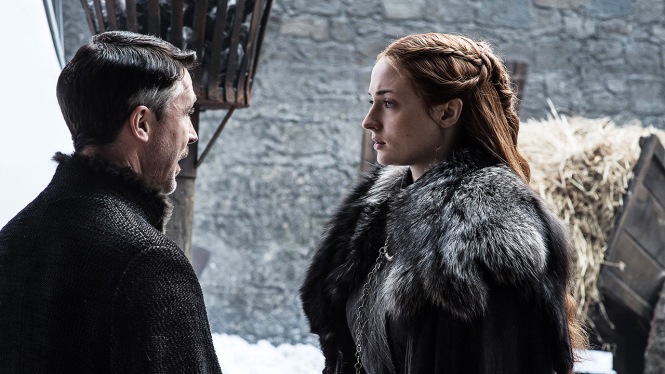 There’s a lot that I really love about the Oldtown material this season. Jim Broadbent is a core member of that elite group of actors I’d pay full admission to watch read the phonebook and the stuff with Jorah and Sam has been fantastic. Most of all though, is the way they’ve been lighting the citadel interiors in a way that manages to make every set up resemble a Baroque painting. For example, the low angle shot where Jorah looks up towards the light from the window after exchanging farewells with Sam literally prompted me to loudly whisper “Caravaggio!” to myself, which my dog seemed justifiably confused by.

Finally, we come to what was truly one of the best examples of montage editing Thrones has given us. Since Dunkirk is in theaters as I write this, that means that it must be that special time that comes around every few years when people of my ilk debate vociferously about the relative merits of Christopher Nolan, who’s starting to rival Tarantino in terms of spirited debates that among cinephiles and assorted know-it-alls that seem to obscure what’s actually meaningful (or not) about the actual material.

Lest I digress too much, as I’ve touched on in the past, while I am admirer or Mr. Nolan in general and a huge fan of a handful of his films in particular, I would not consider myself a “Nolanite,” as his more hyperbolic boosters have come to be called. But while he may not the heir to Kubrick some consider him to be, I do regard him as a master stylist, particularly in his use of impeccably composed montages as a means of simultaneously informing character and subtlety misdirecting the audience, almost always with a masterful use of voiceover.

The climactic sequence (arguably/technically two sequences, but I’d categorize it as a unified sequence for reasons I’ll expound on forthwith) of “The Queen’s Justice,” worked on every level of audience engagement. The fate of characters we’re invested in is a directly at stake as the action is unfolding in concert with the voiceover narration of the architect of the strategy being executed (Tyrion), all of which serves as a (not interiorly unpredictable) misdirection to the audience, with the climax of the first part of the sequence and montage being, the reveal of the very driver of the sequence at hand being misdirected and suffering a setback in the process.

In other words, the process of watching the Unsullied triumph in spectacular fashion at what has been set up as the particularly herculean task of sacking Casterly Rock, leads us directly into the reveal that the opponent (Jaime, who knows his brother better than anyone) was one step ahead of Tyrion and as such, takes a much bigger prize, seemingly with little effort, which is communicated to us by the exemption of the same type of elaborate castle-storming we’ve just witnessed at Casterly Rock. It’s a classic bait and switch that does all the work of advancing the narrative, advancing character, revealing a significant shift in the balance of power in the war at hand, revealing two major locations (Casterly Rock and Highgarden) unseen to this point, and transitioning seamlessly into the concluding scene, which was even after all this and the momentous events at Dragonstone, was undoubtedly the highlight of the episode.

Enough cannot be said about Diana Rigg’s contribution to this series. from the biting, dry humor, sheer dramatic virtuosity, and overall gravitas that she’s brought to Game of Thrones in one of the most inspired (albeit obvious, and therefore, fortunate for all concerned) bits of casting I know of. As sad as I am to say goodbye to the Queen of Thorns, I cannot imagine a more fitting and dynamic exit for any character.