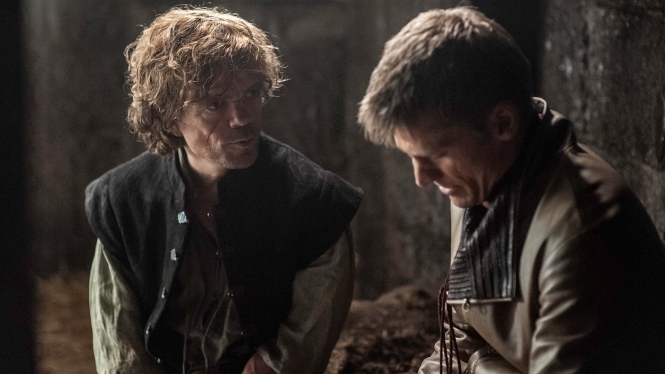 I missed a week in terms posting, but that’s okay for our purposes here because the last two episodes make a really logical pair tonally and thematically, especially in terms of Tyrion’s arc. That brings me directly to Tyrion’s scene with Oberyn, which is now one of my favorite scenes of the series so far. Peter Dinklage is consistently great on the show and in his career in general, but he’s really great here, in my opinion, and for a specific reason. People are quick to rightfully praise things such as his speeches, witty retorts, and comic timing. I, however, believe the real brilliance in his performance is to be found in the way he listens and reacts. This is a particular skill he happens to share with Maisie Williams. Their reaction shots and the specific ways in which they listen on camera are continually astounding to me.

The camera discriminates, even among actors of similar levels of ability; some faces were seemingly just made to be on screen (think DeNiro, Brando, Dietrich, Rowlands, Ejiofor, and so many others in addition to Dinklage and Williams). Dinklage can do more with a single blink or subtle turn of his check than a lot of actors can do with an entire feature. He’s just stellar in these moments. Watching him react to Oberyn’s recounting of his trip to Casterly Rock during Tyrion’s infancy was incredibly moving, taking a beautifully written passage from the book and transforming it into something utterly cinematic. If a viewer came into this universe beginning with this one scene, they’d have ample background on Tyrion’s relationship to his siblings and the world around him vis a vis the cruel and in many cases willful misperceptions and prejudices surrounding what can accurately be described as a medieval equivalence to celebrity.

The image of “the Imp” is known throughout the realm and these last two episodes show perfectly what that looks and feels like to the folk as well as how the subject himself lives with it and internalizes it, exposing the limits of his well-honed defense mechanisms he’s developed against it. Tyrion is far too intelligent to not be wounded by all of it. His rage during the trial, his desperation with Jaimie and Bronn, and finally his despair by the time Oberyn visits his cell are all on full display, which makes his relief all the more palpable and touching when Oberyn volunteers to be his champion. I love these two characters and the way they intersect in terms of their respective arcs and their traits, and I’ve made no secret of how much I appreciate the work of Dinklage and Pascal this season. This scene was such a pleasure to watch, and with the exception of The Sopranos and Breaking Bad, no show I’ve seen has ever done a better job at providing scenes with the quiet, steady confidence demonstrated by this creative regime, allowing camera and performance to provide so much information without over-saturating the experience with excessive scoring or a glut of expository dialogue. 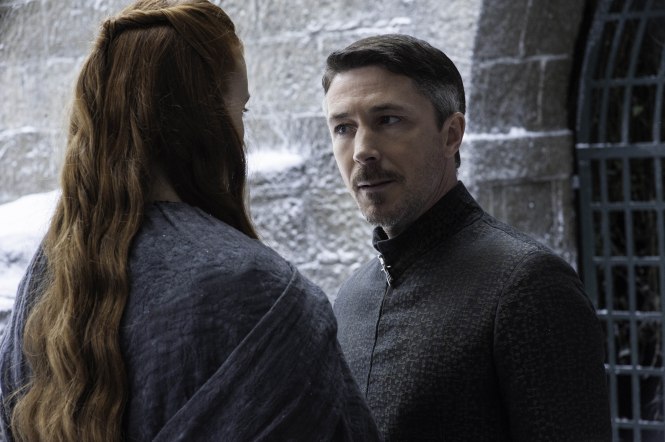 The books stand on their own to say the least, but the scenes with Little Finger demonstrate perfectly why the books were so rife for adaptation to serial television. There’s something so salacious yet completely rich and credible about the Baelish story lines. I like House of Cards just fine, but I don’t think it holds a candle to Game of Thrones where it comes to political strategy and tactics. Little Finger is Frank Underwood with so much more to lose and a much weaker hand to bluff by. Add the way his Cat Tully/Stark baggage motivates him and vice versa, and the Little Finger stuff is soap operatic in the best way possible. A lesser actor than Aiden Gillen could so easily fall on his face in epically laughable fashion with some of the choices he makes, but in his hands Petyr Baelish is easily the best thing about the series independent from the source material. By that I mean that there is a Little Finger experience made available by the narrative perspective of the TV series that isn’t in the books.

The scenes with Sansa may not seem like the best examples because they are in the books by way of Sansa’s POV, but the fact is that these sequences are enhanced by the additional time spent with Baelish leading up to these moments. In any case, I think they’re doing an excellent job with these Eyrie sequences this season. They’ve struck a delicate balance here, managing to insert palpable sexual tension between Baelish and Sansa without drifting into American Beauty territory or just being creepy minus the complexity of the situation Sansa finds herself in. There’s a lot more going on here besides Little Finger being a lech towards the adolescent spitting image of his great unrequited love, but of course that is a huge part of what’s going on.

I’ve said it before, but this continues to be the year of Sophie Turner. She’s really come into her own as an actor this season. Part of it may be that this is the part of the narrative where I really got into her story in the book, but I’m giving a lot of credit to Turner as a young actor for stepping up into the Big Leagues in service of a much maligned character (unfairly so, in my opinion). Also, the cinematography in the garden was absolutely gorgeous. Spectacular composition. No series on television does snow like Game of Thrones. 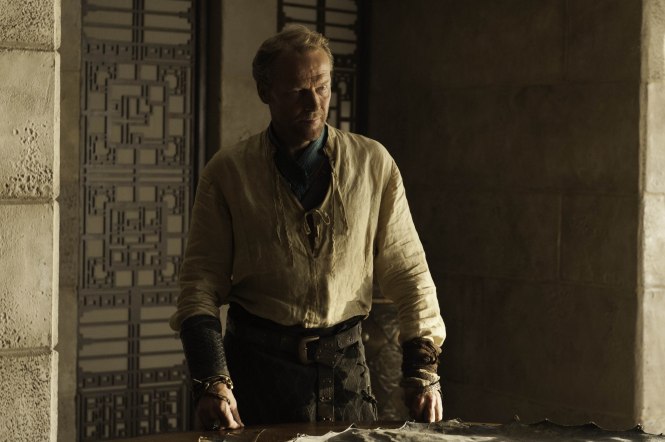 Speaking of good acting and body language, Ian Glen reacting to Daario emerging from Dany’s chamber was fantastic. Without overplaying it, his body seemed to contort in a way we haven’t seen in all four seasons, as if Jorah just couldn’t hide a physical reaction to something so deep inside of himself, leading to a nice little scene with himself and Clarke, who are always good together.

It was a good contrast to the previous sequence where we see what amounts to the Khalessi paying a visit to a male strip club, which I felt was a little goofy and a failed attempt at gaze inversion, much unlike the Dragonstone scene with Melissandre and Selysse, which I think served as a great example of empowering nudity. No shame or mugging for the Red Priestess, and there is no more confident character in the story.  She uses her sexuality like she uses potions, illusions, and rhetoric; all to her advantage. This scene demonstrated that extremely well. 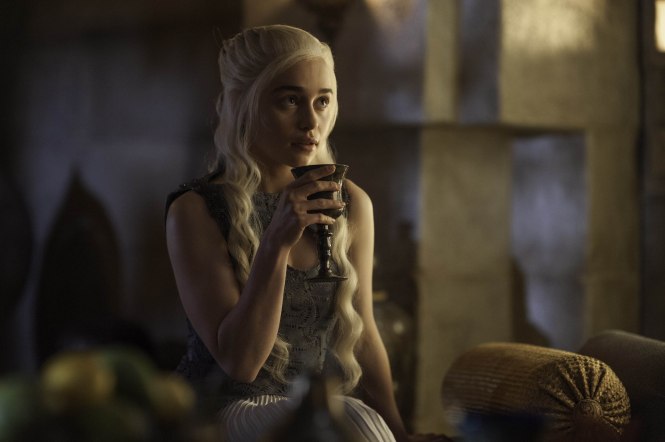