I recently viewed Terrence Malick’s Days of Heaven for the fourth or fifth time and it was no less impactful than it was the first time I saw it.  The blisteringly beautiful cinematography of Nestor Almendros and Haskell Wexler is the hallmark of this film which remains the quintessence of style of a master filmmaker.  The “little things” make all the difference in this film, like the shot of the wind blowing on the water and blades of grass.  Details like Sam Sheppard reaching out for Brooke Adams’ hand in the woods.  So many unforgettable moments such as the swarm of locusts descending on the farm, the imposing farmhouse designed and built by the great Jack Fisk in the distance as the migrants approach the property, and the way the camera seems to float in the stream and circle playfully around Gere and Adams. 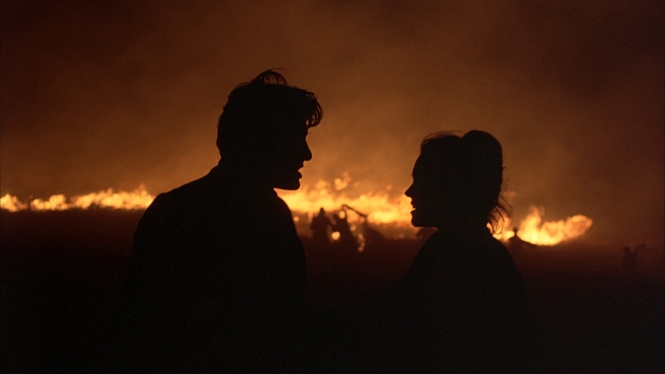 Malick’s films make you feel as though you’re viewing a direct feed to his mind.  His films flow like liquid and have a heartbeat like an organism.  You can feel the touch of the wheat in the field and the heat of the fire as it rages on, consuming all in sight.  As a viewer of Days of Heaven one is always in the room with the characters, observing their every move, tapped directly into their emotions, but from a distance allowing you a larger perspective.  It’s like a painting with a pulse.

The Criterion HD transfer is gorgeous, as the film deserves.  Days of Heaven is a film for filmmakers and cinephiles: it’s the medium on full display exhibiting what filmmakers at the height of their craft can do when given the freedom and resources to do it.