Much like Fox Network’s excellent Cosmos with the outstanding Neil DeGrasse Tyson, “Into The Dalek” was basically an episode of The Magic School Bus with a much better teacher than the insufferable Miss Frizzle. Whatever the state of The Doctor’s pedagogical accumen, I have to say I didn’t walk away from this episode feeling like I actually learned anything new or exciting about Daleks. I could’t help but feel like we’ve seen most of this before. Part of this is pretty much unavoidable; part of what’s great about Daleks is their consistency-Daleks are reliable. I’m not sure we learned anything about the Doctor either, as its been well-established that he’s basically a war criminal who hates Daleks at a fundamental level.

We did however learn about the mysterious Danny Pink (I’ll bet we did). I can predict where this is going but I’m interested to see how it plays out. Danny Pink’s arrival is good for Clara in my opinion because I think she needs somebody else to play off besides The Doctor.  Speaking of Clara, after all the progress made in “Deep Breath,” it seems that she’s slipped back into the mode that leaves me wondering what her purpose is as a character. By purpose I don’t mean in the grand scheme of things as in the “Impossible Girl” stuff, but in terms of an episode to episode narrative and character purpose. It comes across as though she’s got no inner-life of her own-she exists completely in relation to The Doctor. 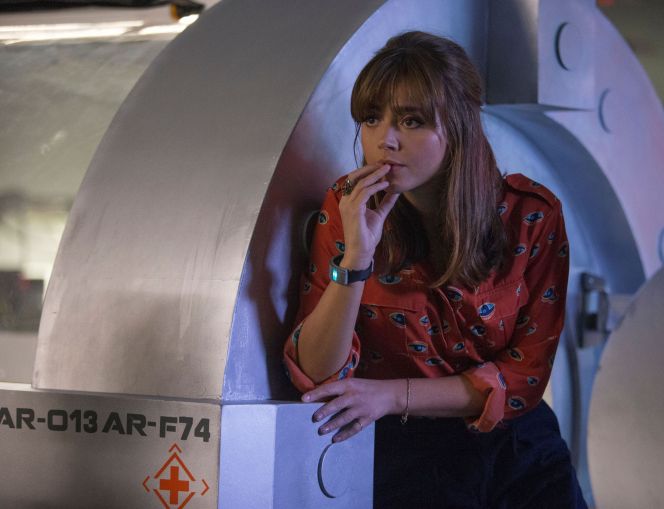 All of the other post-reboot companions could have conceivably had their own show if you take away The Doctor, but I can’t imagine what that show would be if you were to do that with Clara. I mean, honestly, who is she? I don’t think any of this is necessarily Jenna Coleman’s fault. I actually enjoy her performance-I find her to be funny and charming, it’s just that she doesn’t have much to do. I think the problems with Clara are problems with the writing, which is surprising to me because the writing is the most consistent quality of the series. Seriously, how many Hugo winners does it take to write a decent Companion?

Overall I felt it was an uneven episode, but enjoyed the Danny Pink stuff and the idea of going under the hood of a Dalek is an intriguing one that gives you a lot to chew on. We had more good moments with the new Doctor this week, seeing him grapple further with his identity. I enjoyed the bit with Clara not being able to tell him if he was a good man or not, but the Dalek having no trouble informing him that he was a “good Dalek.” The Daleks always serve as a good metric for The Doctor to measure himself with.