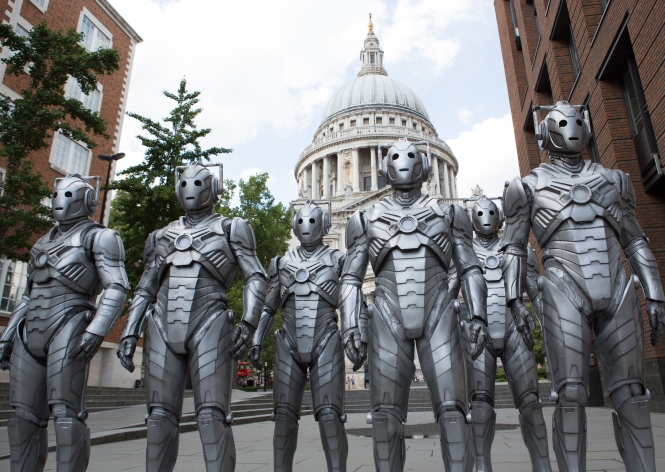 Let me start out by saying that I think the idea behind this story is really interesting-I just wish we got there in a more interesting way. I’m not sure why they chose to kill Danny in such a dramatically un-impactful way. It was one of those deaths you can see coming from a mile away yet doesn’t make any logical sense within the narrative. I simply don’t understand why he chose to stop in the middle of the road. I don’t understand what Clara was doing on her end either, but I’m going to hold off on that point in the hopes that it’s addressed in the concluding episode. If I give the show the benefit of the doubt, I’m assuming that there’s a reason that Clara was acting all panicky over the phone with the post-it notes at that exact moment that for some reason causes Danny to stop in the middle of a crosswalk.

Other than that, I thought everything was really solid. It’s great to see Clara cashing in on The Doctor’s affection and loyalty towards her. Subsequently its great to see The Doctor doing something completely batshit because it matters to someone he cares about. The Nethersphere concept is fascinating and its made all the more interesting by the involvement of Missy (Mistress) and the Cybermen. There’s something about the presence of Cybermen that makes me feel like I’m in the bosom of classic Who; they’re oddly comforting in a menacing kind of way.

I feel slightly stupid for not seeing Missy’s true identity from farther away, but things like that are not exactly my strongest suit when it comes to absorbing narrative, so I suspect I’ll get over my shame there fairly quickly.

It’s interesting to me that the same individual who’s lived for a millennium and regenerated a dozen times finds the concept of an afterlife so absurd. It’s like when those wealthy Republican types who inherited their fortune complain about “handouts;” people always seem to think that they’re the exception. I can’t blame The Doctor because I think I’d instinctually react the same way he did to the idea of 3W, but to me it always highlights his arrogance when the guy who bends the laws of the physical universe doesn’t buy an outlandish concept.

I thought the guest appearances in this episode were especially good. Samuel Anderson does some of his best work here so far, and it’s great to see more extended appearances from Michelle Gomez and Chris Addison. I also thought Andrew Leung as Dr. Chang was particularly funny in this installment.

On its own, “Dark Water” is one of the strongest episodes of Series 8 so far, and if the season wraps up well next week this could be a vintage finale, which is more than you can say for the last couple of finales. Either way, it’s been an excellent season. Looking forward to seeing how it concludes.