As if we weren’t already, I think we’ve officially moved into the period of Game of Thrones the television series becoming its own coexisting and interrelated but separate entity from the A Song of Ice and Fire book series. While I cherish Martin’s books in a way that is different from the way(s) I regard the television series, I don’t view this as a positive or negative development, necessarily, it’s simply the new reality.

Arguably, however, this has always been the case. The show has of course, and quite necessarily, never been a completely faithful adaptation of the source material even thought it has been faithful enough in enough crucial ways to perhaps lull some viewers into thinking that it would stick that close to the source material for the duration. As a viewer and a consumer, I hold every series to a certain standard of quality and integrity, but short of that in regards to Game of Thrones, all that matters to me, personally, is that the series stay true to the spirit of the characters and the narrative. There’s no guarantee I’ll completely love every direction they choose to take the show in, but there’s no such guarantee when it comes to the books or any other work either, which is precisely why challenging material can be so rewarding when done well.

Like a few other episodes from this season, “Hardhome” was slightly uneven but ultimately successful and exceedingly rich in it’s strongest areas. There’s been a pattern in a lot of episodes this season of there being a lot of minor sequences (not necessarily in terms of importance or impact, but more in terms of scale and run time) strewn throughout the season seemingly meant to keep certain storylines moving; propping up one or two larger set pieces or chunks of storyline, almost as if these larger sections are “tentpoles” for the series this year. Perhaps this pattern has always been present on Game of Thrones and I’m just now choosing to pay attention to it, but its stood out to me in Season 5 regardless. Those “larger” segments this week were obviously the Mereen and Hardhome material (you don’t name an episode after something unimportant, after all).

As much as I felt getting Dany and Tyrion together was rushed, having them in the same room just feels right. I’m almost as big a political junkie as I am a film/media buff, so I’m one of those people who doesn’t mind sitting around listening to extended policy discussions. I’ll even sit through uninteresting policy discussions, and there is not much out there more interesting to me than this particular chess game. It only helps that their couple of scenes, especially the one where they’re alone, face to face on the same plane (physically, at least) wherein Dany expresses her desire to “break the wheel” of the rotating Westerosi ruling elite. 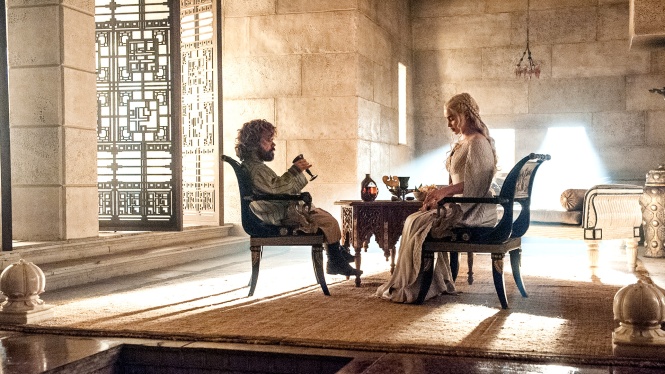 What makes Tyrion and Dany such a great combination is that they genuinely have something to offer each other; Dany needs a voice in her court that will be honest with her but isn’t “devoted” to her in the way that the members of her circle are (assuming loyalty). Tyrion isn’t necessarily indebted to her apart from her choosing to save his life, but his life is only in her hands at this point because of a series of injustices and unfortunate events that led him to be placed before her mostly illegitimate authority. They’re right for each other because their interests actually intersect. They each have something the other either wants or needs. It only helps that they can match wits when it comes to certain things.

What’s more is that they compliment each other in a lot of ways as well. While they’re both functionally orphans in exile who’ve been denied their “inheritance” in one way or another, Tyrion’s detachment and cynicism could serve Dany well given that she’s so often bogged down politically and strategically by her own often stubborn sense of justice, morality, and frankly, entitlement. Tyron offers her perspective she doesn’t really have any other way of getting. As for what Tyrion gets out of the arrangement, his is far too keen a political intellect to go unused as long as he’s living, and Dany is surely the only serious contender for the Iron Throne who would take him at this point. While this is probably not the best comparison as far as the actual characters are concerned, I really do feel like Dany’s George W. Bush has met her Karl Rove in Tyrion Lannister. 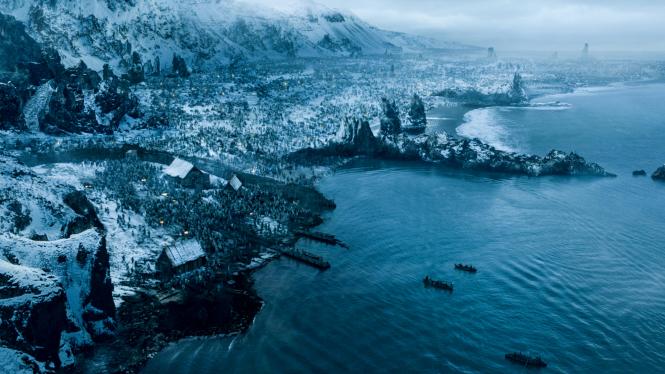 Of all the departures from the books Game of Thrones has taken so far, the Hardhome sequence is, in my assessment, the most astute, narratively successful, and dramatically satisfying, at least in the immediate term. What was so affective about the big reversal in that sequence from the perspective of a “book reader” is that everything was going more or less as it had in the book and then took as sharp a turn as it possibly could have, taking an event alluded to in the books but not witnessed by a P.O.V. character and turning it into an impactful and crucial moment for one of the most important characters of the series, both in terms of his own development and his story as a whole.

The Hardhome sequence itself was, of course, completely visually stunning and dramatically compelling. Kit Harington continues his excellent work this season in a sequence that allowed and required him/his character to deploy the most crucial lessons Jon’s major father figures, Ned Stark and Jeor Mormont had taught and passed down to him. Jon needed to deploy his father’s resolve and moral integrity, Mormont’s diplomacy and urgency, and the leadership and willingness to make tough decisions and stand by them that he learned from both in the meeting with the Wildling elders, in a scene that closely resembled Mormont’s meetings in Craster’s Keep. In the ensuing battle, Jon was made to utilize the combat skills and bravery taught to him by Ned, while also wielding the very weapon given to him by Mormont, both of which turned out to be of more figurative and literal value to him than he or the audience even knew. 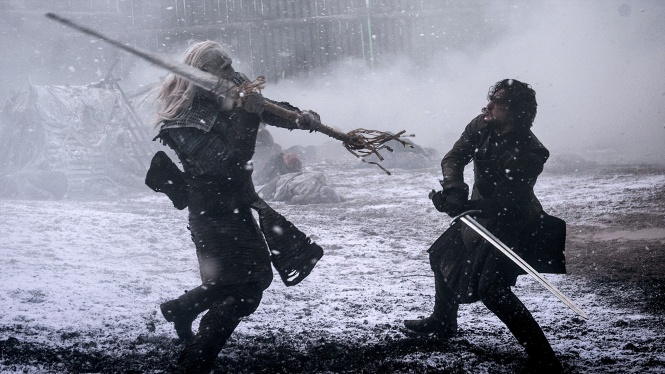 Part of what I loved so much about the Hardhome sequence was how it served as a reminder that even in such a bleak narrative reality as this, there are moments of genuine decency, leadership, and true heroism. A Song of Ice and Fire is set in as murky a moral universe as I can imagine, yet still there are characters such as Jon who while managing to be undeniably multidimensional from a narrative standpoint are also, somehow, nearly unimpeachable morally and ethically. In the books as well as the television series, I come away with a great deal of admiration for Jon. He’s a truly incredible character in this way, which is a huge part of what makes him such a worthy and consistent fan favorite.