For the first time since HBO began airing Game of Thrones, those of us enthralled by and dedicated to A Song of Ice and Fire and aren’t plugged into the inner circles of George R.R. Martin, David Benioff, D.B. Weiss, or anyone else steering the ship of the franchise in either media are officially in uncharted territory. We’re all equal now; nobody knows exactly what’s going to happen. To be clear, the sense of security and/or authority any of us who knew the books ever felt about the course the television series was taking or how events would unfold therein had always been misguided, presumptuous, or spurious at best, and was demonstrated to be so increasingly over the time Game of Thrones has unfolded, but now it is ironclad. Regardless of how and to what extent the novels unfold it can no longer be argued (if it ever could) that the books are canonical in manner superior to the television series. In the present and immediate future, the television series is now driving the narrative in at least equal footing with the books. Whether or not Mr. Martin eventually completes the cycle, it is totally inconceivable that the books would overtake the television series at this point.

The beginning of “The Red Woman” caused me to have flashbacks to the days when Lost was airing new episodes and would routinely end seasons on massive cliffhangers and then start the proceeding season in the exact same place they left off. Although I’ve made myself pretty clear on to what extent I thought the Jon Snow execution was really a “cliffhanger,” I do think it was wise of Weiss and Benioff to get that first Wall scene out of the way. 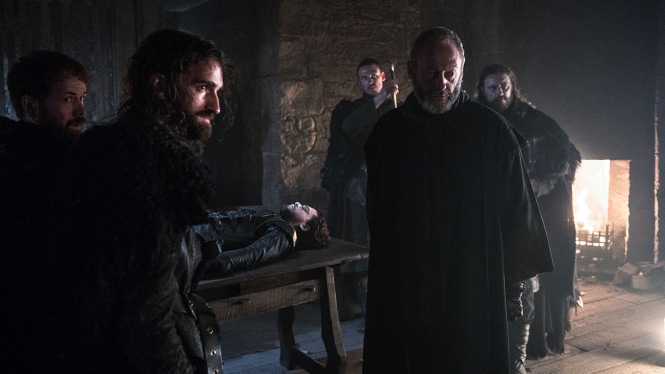 Owen Teale did an amazing job with the speech he gave to the brothers in the hall justifying his treason. It struck me how completely prepared and resolute Alliser was; one feels as though he’s really giving his best pitch. It reminded me somewhat of a political candidate’s closing statement of the last debate before an election, except Alliser delivers this statement much more effectively than most politicians I’ve seen. I think he’s wrong, but he clearly believes he acted righteously, and I’m sure it’s not too much of a leap for the men of the Watch to convince themselves of the same.

Though “The Red Woman” was a strong episode, there were some bits here and there that felt a bit perfunctory, such as the Bolton sequence, Arya’s reintroduction, as well as Dario and Jorah’s discovery of Dany’s ring, even though these sequences were mostly engaging. In the case of the latter scene, it’s tough from a narrative standpoint because there are characters obtaining information that the audience already has, and we didn’t learn anything new about the characters. So, the scene moves the story forward because we need to see that they learn what they learn, but that was about it.

Quite the opposite of perfunctory and my favorite scene of the episode by far was Brienne pledging her service to Sansa after she and Pod rescued her and Theon from the Bolton men. Everything about this scene was just gorgeous; the cinematography, the score, and most of all the performances from Sophie Turner and Gwendoline Christie. I’m not ashamed to admit that this scene tested my composure as a viewer in ways few scenes have. This one is up there for me with Cercei’s beautiful scene with Tommen after Margeary’s arrest in last season’s “The Gift.”

Speaking of Cercei, Lena Headey continues her bid for Most Commanding Screen Presence This Side of Daniel Day-Lewis (I feel someone should actually hand that award out) in an absolutely heartbreaking closeup as she sees Jaime arrive with Myrcella’s body in tow. This was followed by yet another electrifying scene between Cercei and Jaime. Headey and Coster-Waldau have always been great together but I feel like they just get better over time. The emotional intensity of their scenes together is so palpable to the point that it’s almost operatic, but it never feels forced, false, or over the top, its just exactly where it needs to be. 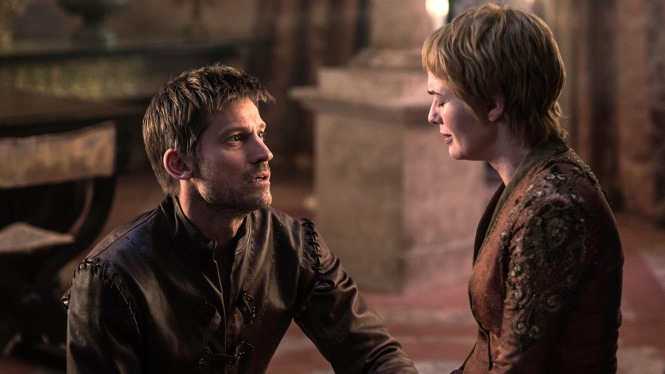 What makes Cercei such a fascinating and multi-deminsional character is that she acts rashly and sometimes cruelly on negative emotions and as such has done some truly horrible things that have had devastating effects on a multitude of people, but it’s all driven by an intense need and desire on her part to protect her children and Jaime. She’s regarded as a villain on a surface level, but if you really consider her character and what she’s gone through and the options before her for how to deploy the relative power she has and has been able to amass, I think it’s very difficult to simply demonize because she is ultimately a tragic figure.

I’m of two minds about the Dornish material in this episode. On the one hand, I still love the casting, especially Indira Varma who’s been one of my favorite actors for a long time and I’m still fascinated by the region and the culture, but the narrative just didn’t quite click in season 5. Similarly, I thought the assassination scene in the Water Gardens was really strong in this episode, as was the actual execution of the Tristane assassination scene that followed, but I found myself being profoundly confused by some rather significant logic issues this scene raised, something this series is especially adept at avoiding. For one, I could have sworn I saw all three Sand Snakes standing next to Ellaria on the dock in Dorne as the ship carrying Myrcella, Tristane, and Jaime sailed away (they were, I checked the footage). How, then, did Obara and Nymeria come to be on that same ship as it departs King’s Landing? It is surprising enough that Tristane was (seemingly) allowed to return to Dorne in peace (or that there wasn’t a significant incident on the ship after Myrcella expired), but Tristane doesn’t appear at all surprised to see his cousins when they emerge to kill him. Seeing as the aforementioned textual evidence overwhelmingly suggests that they couldn’t have stowed away, I simply can’t figure out how they came to be on that vessel.

It’s great to see Dany speaking Dothraki again, for a number of reasons. Her proclamation scenes are always fun even though they’re all basically the same in a lot of ways, Emilia Clarke just really sells it every time with the authority she projects and its especially effective when its delivered in Dothraki or Valyrian. As far as the plot goes, I had assumed they’d be taking her to Vaes Dothrak, but I’m still very interested to see how this plays out.

Tyrion and Varys’s scenic stroll through Meereen was a definite highlight, especially the hilarious bit with Tyrion’s botched Valyrian where Varys had to assure the woman that Tyrion wasn’t trying to eat her baby. Peter Dinklage and Conleth hill are becoming what Terry O’Quinn and Michael Emerson were on Lost where it just feels like these two master craftsmen with tremendous on-screen chemistry were meant to act together. Every scene they have together just crackles. 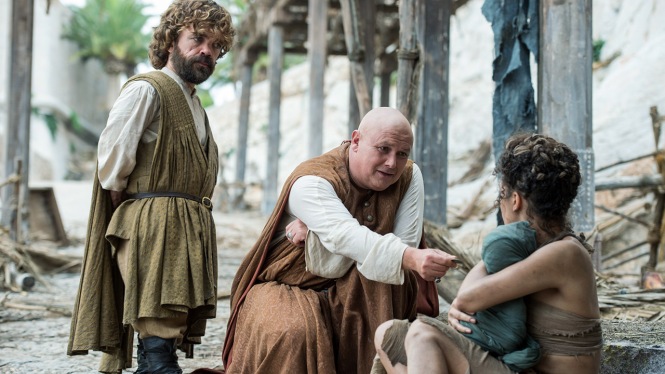 The other highlight of the Meereen sequence for me was the glimpse we got of yet another Red Priest spreading the message of the Lord of Light. One of the things I’m most interested in seeing develop this season is the increasing role religion is playing in the proceedings, not only in regards to R’hllor and his acolytes, but also with the Sparrows in Kings Landing, who’ve shifted the balance of power in some really interesting ways. Indeed, the use and treatment of religion in A Song of Ice and Fire is one of George R.R. Martin’s greatest achievements in my opinion. It’s a constant presence throughout the series, but it’s never discussed in any great length or over-determinant in ways that could easily detract from the focus of the narrative. It’s most interesting to me in the ways certain characters, most notably the High Sparrow and Melisandre, employ it as a tool to certain ends and objectives, regardless of their actual faith.

In my reaction to the season 5 finale I made note of how taken aback I was at Melisandre’s reaction to the news of the defection of Stannis’s forces after the sacrificial execution of Shireen. I admit to being a cynic and a stubbornly and staunchly agnostic one, at that, and it had occurred to me that Melisandre may actually believe in what she preaches on one level or another, but the fact that she had always been such an active manipulator of events in ways that seemed to benefit her that I always assumed she utilized her religion at least mostly for her own purposes as so many clergy and religious authority figures throughout history have and continue to do.

A crisis of faith can be a transformative experience for any character, and Melisandre, especially in the hands of the outstanding Carice van Houten, is a more interesting character than most. I’ve been yearning to learn as much as possible about who this person actually is, not just biographically, but psychologically. The turn her story has taken going back to last season is a ripe opportunity to do so and the final scene of “The Red Woman” (as well as the title itself) provides a perfect symbolic representation of the process of peeling back the veneer of Melisandre as she performs her for others in the narrative. It also notably harkens back to the speech the High Sparrow gave to Cercei before her confession about “peeling back the finery” to reveal our true selves.

It’s more than strongly hinted at in previous material that Melisandre is much older than she appears or presents, but it was still jarring and eerie to actually see it on screen, especially since one can still see so much of what we’re used to seeing in her, but she’s been changed in fundamental ways, which is visualized brilliantly by this brief but powerful scene.