Game of Thrones is so stylistically and structurally consistent that every time they do something completely normal for a television show to do, like cutting away from Stannis’ decapitation last season or starting an episode with a cold open as they did in “The Broken Man,” I jump out of my seat with a combination of shock and outrage, thinking that my cable is malfunctioning or that HBO screwed up the broadcast. When the “HBO Entertainment” card faded and the cold open began, I actually rewound the DVR thinking that the cable box had somehow skipped ahead of the opening titles. The reason for the first cold open Game of Thrones has ever employed on a non-premiere was quite obvious to me by the end of the scene, as it was, I suspect, to most viewers.

The scene itself was really well done and highly effective. It reminded me of the cold opens that Lost used to employ and deliver the “big reveal” to maximum impact. The location of the scene and the way it was utilized was strikingly gorgeous. They’ve used those hills several times but in this episode especially they absolutely popped with some of the greenest green I’ve ever seen on screen. The scene was also a great delivery device for the welcome return of Rory McCann as the Hound and the introduction of Ian “Welcome To Fuckin’ Deadwood” McShane, who is an amazing actor whose exceptional performance on the transcendently great Deadwood makes him a shoe-in for the Mt. Rushmore of HBO lead actors.

Speaking of landscapes, I was struck by how grandly pastoral this episode was. Thrones has always made excellent use of their exteriors and locations but installment seemed to revel in it in a way we don’t often see, especially in the aforementioned material as well as in the Riverrun sequences. Even the more claustrophobic set ups and effects shots had an atmospheric quality to them to a greater extent than usual, like the stunningly beautiful effects shot establishing Bear Island. Even the scene at Deepwood Motte, which looks like it was likely shot on a stage, had a moody resonance to it that attests to quality of the design and cinematography Game of Thrones consistently delivers.

I really enjoyed the sequences with Jon, Sansa, and Davos lobbying for military support and the way those scenes progressed and built on each other throughout the episode. They were almost like a feudal combination of pitch meetings, pan-handling, and door to door canvassing. As someone whose worked as a field organizer on a political campaign, I feel for them in regards to the latter category.

It was interesting the way that in a given setting one or some of them were better suited to the audience than others; Jon did all the talking with the Wildlings, naturally, Davos ended up having the right pitch for Lyanna Mormont, and everybody struck out with Glover. That moment at the end of the Deepwood Motte scene was a really interesting Sansa moment because it highlights that despite how much she’s grown, she really lacks the diplomatic touch is frankly not great with people overall. 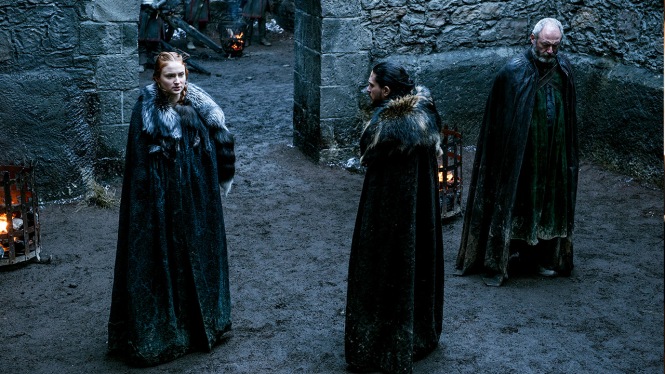 The Riverrun material was excellent, especially in terms of the aforementioned pastoral beauty and the sheer magnificence of the castle itself in both production design and CGI components. When I was a small child I was a huge geek for the medieval period and all its trappings (I recall trying to convince my parents to let me build a moat around our house). My interest in the period waned as time went on (I blame the relative lack of good material available set in the period), but it’s always been something I was interested in. This season of Game of Thrones has really reminded me of how into that stuff I was in the way that this season more than the previous ones has really showcased some of the more large scale and logistical aspects of medieval warfare like chivalry and siege tactics. The tracking shot of Jaime and his escort riding to Riverrun through the Lannister camp was especially impressive and regal in a way that the show doesn’t often present, reminiscent of the pageantry and spectacle of the march on the Great Sept in the previous episode.

The Riverrun sequences were also quite strong dramatically as well, particularly the parle with Jaime and the Blackfish which, as an aside, is the best nickname in the series, in my opinion. What’s more, this scene mirrors the scene between Cersei and Olenna in the same episode. In both cases, the ever cocky Lannisters go into the scene armed with all their rhetorical wit and intelligence, only to be thoroughly “dressed-down” by prickly elders who have been playing this game for longer than the Lannister twins have. Lady Olenna’s monologue about Cersei being perhaps “the worst person she’s ever met” was one of Diana Rigg’s best moments of the series. 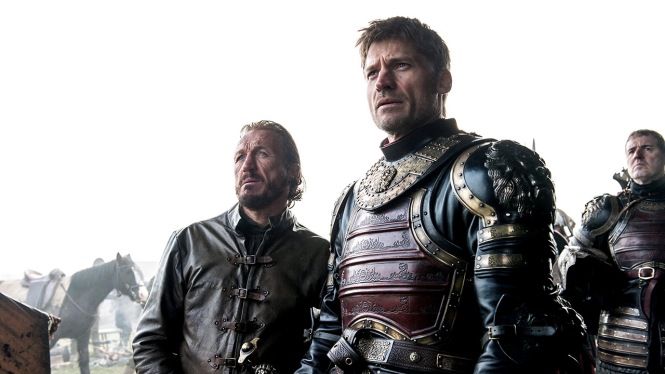 Finally, one of the few minor flaws of the middle seasons of Game of Thrones was the hit or miss nature of some of the Greyjoy material, which I think was largely due to the massive gaps in between Yara’s appearances prior to this season. Its been rewarding to spend more time on Pyke and with Theon and Yara together, and it paid off in full with the scene featuring the two of them in the brothel in Volantis. It was a lovely and heartfelt scene shot mostly in close ups, which allowed Alfie Allen and Gemma Whelan to carry all the weight of the scene with two excellent performances. It incredibly touching to see the bond between two characters that by all expectations could be as vile to each other as the rest of their family are and have been to them, but acknowledge and affirm that they need each other.

“Tough love” when done poorly is one of the worst and least effective onscreen cliches, but Yara’s actions and appeal/plea to Theon in this scene felt right in line with their culture as iron born and her personality. It was one of my favorite “sibling” scenes and easily the most affective Greyjoy scene of the series thus far.