Great athletes on the level of a Michael Jordan in his prime sometimes reach a point in their careers where they begin to dictate the terms of the competition; they’ve ascended to such a level of unprecedented greatness that the execution of their endeavor consists of them continually raising the bar they have set for themselves and their competition. I believe that from a narrative standpoint, Game of Thrones may have reached that level of greatness and proves it by continually raising the bar for what a series can do on television. It really cannot be overstated how spectacular an achievement it is to adapt and sharpen such a sprawling, complex narrative and juggle that many characters for a televisual format and manage to not be tedious, confusing, or even remotely boring.

I’m not interested in making pronouncements here regarding where Game of Thrones ranks in terms of television series past and present or passing out labels along the lines of “best show on television.” Indeed, it’s difficult for me to even think about Game of Thrones as a television series beyond the obvious fact that is is actually a television series. The point is that the experience of following the show is vastly different than the experience of any other series. Just as the first season of True Detective stretched the medium and used it for something wholly different and more cinematic than it has been for so long, Game of Thrones has cinematic elements, but it’s not cinema; it’s avowedly and truly a serial narrative. Seasons of Game of Thrones don’t exactly unfold like novels either, which is remarkable considering that they’re faithfully adapted from actual novels. I don’t think the series has eclipsed the books (nor do I think that’s even an especially relevant discussion), but I do think that the series has carved out its own space along side and apart from the books and deserves to be evaluated accordingly, both narratively and culturally. This is demonstrated by all the ways that the show has grown and improved as it progresses in a manner not reflected in the novels. While the books arguably peaked with A Storm of Swords, the series has continued to improve with every successive season. 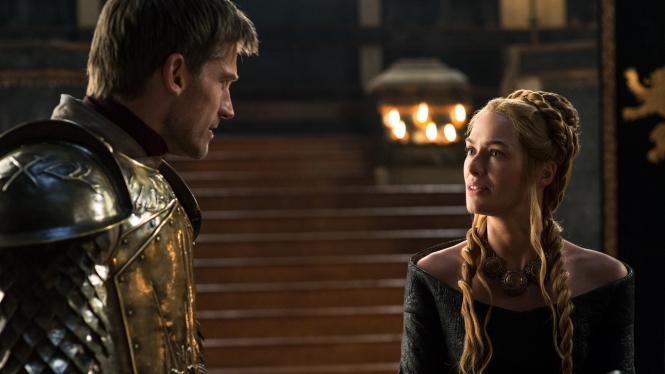 It’s probably a bit redundant at this point to say that Game of Thrones‘ premieres are strong, especially in light of the fact that there isn’t really any lag throughout the respective seasons or the run of the series overall to this point. It is worth noting though, especially seeing as some truly great shows (Mad Men probably being the best example) do not always have the greatest season premieres, especially in relation to the quality of their seasons and their strongest episodes. Part of what makes the Game of Thrones premieres so outstanding is how effective they are as tone-setters for the forthcoming season. One could almost say that they serve as thesis statements for the season as a whole. Despite having read A Dance With Dragons, I’m not going to presume to know exactly how Season 5 will play out (especially since Weiss and Benioff have promised that readers will be shocked this season with some of the deviations taken) but it certainly appears that transitions of power, changes of environment and further disruption of the status quo will be at play this year. I realize that’s not exactly going out on a limb considering the nature of the series, but I think it’s safe to say there is some truly pivotal stuff upcoming.

Everything on Thrones continues to look gorgeous, from the entire mise en scene to the cinematography. The unprecedented visual grandeur and beauty of Game of Thrones is one of the features that separate it from every other series produced to this point. When watching a technically superior series over a long time it can be easy to take the cinematography, wardrobe, makeup, and art direction for granted, but that never happens with Game of Thrones because there’s always something you haven’t seen before that just takes your breath away as a viewer. The way in which they reveal new locations is always thrilling and the way they’re able to find new and interesting ways to present familiar locations like The Wall is a huge part of what makes the show so rich.

One of the most interesting things about Game of Thrones as an adaptation is the larger perspective and scope made possible by the more omnipresent point of view the show takes in contrast to the individual POV structure of the books. One of the most enjoyable features of this are the outstanding pairings the show presents, some of which are in the books and some that aren’t. The resultant one-on-one dialogues are one of the great pleasures of the series and this episode had an abundance of them, the most engaging for me being the exchanges involving Jon Snow, first with Melisandre and later with Mance Rayder. Jon and Melisandre’s scenes together are fantastic in the books and I think Harington and van Houten are great together. Carice van Houten’s performance continues to impress me with how she takes a character who is not in my top tier of interesting characters from the books and make her somehow completely fascinating. Her presence on camera is spectacular. The scene between Kit Harington and Ciaran Hinds was incredibly well done, and as a longtime fan of Hinds I’ve come to expect nothing less. I especially loved how that scene mirrored the pre-execution scenes between Varys and Ned in Season 1 and between Jaime  and Tyrion towards the end of last season.

The CGI, which was excellent to begin with, continues to grow to such an extent that it’s almost seamless in the visual tapestry of the milieu. The space sequences on Battlestar Galactica (Revisited) might still take the cake for me as far as CGI on television, but there’s just something about the computer-generated wide exterior shots and creature effects on Game of Thrones that knocks me out. I continue to be blown away by the dragons and how astoundingly and completely real they look. The greatest success of Martin’s books is how he’s able to construct an imaginary universe that’s grounded so strongly in the lived reality of human beings that it feels totally and convincingly real. There’s nothing “fantastical” about the Ice and Fireverse. 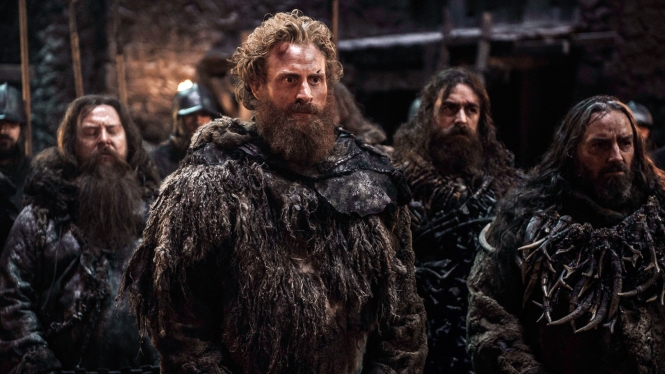 Everything in this episode was spectacular, but the standout content has to be sequences at The Wall. I’ve always enjoyed The Wall chapters in the books and I find that I enjoy some of the sequences set there on the show even more, partly because the set and the CGI both look literally better than I imagined. That first effects shot of the series where we see The Wall is Game of Thrones‘ version of the “Star Destroyer shot” from A New Hope; if you buy that first effects shot, you buy the movie. And just as the “Star Destroyer shot” was and still is completely convincing, so too was that first effects shot of The Wall. Consider how important that image is to the series; The Wall is in so many ways the audience’s “way in” to the show. Just as the gate opens for the Rangers in that opening sequence, so too does the figurative gate open for the audience as we enter the world of Ice and Fire on screen.

I mean all this to emphasize that things that happen at The Wall hold a special significance. Along with the Iron Throne, The Wall is the central symbol of A Song of Ice and Fire. Nearly everything the narrative is about is encapsulated in those two physical objects, what they represent, and how the characters relate to them. So, to see various characters watch in horror, solemnity, disgust, and sorely misplaced delight or satisfaction as Mance Rayder is burned alive is a reminder of how completely real this narrative universe is. It is just the opposite of the images of dragons and White Walkers that serve to inform or remind us of how far beyond our own familiar realities this universe extends. Moments of horrific inhumanity such as this, Ned’s execution, the Red Wedding, Oberyn’s skull crushing highlight how frail and disposable human life is in the normal course of the world these characters inhabit. It is a world where human beings are executed and desecrated to prove a point or send a message by those exerting power over them, just as our own is. These stories are great because they recognize and explore how tenuous our existence is, as both individuals and as societies. That’s why at it’s core, A Song of Ice and Fire and Game of Thrones are not essentially works of fantasy, because the violence committed is entirely recognizable to us on an emotional level, whether or not we’re entirely conscious of it or choose to acknowledge it.