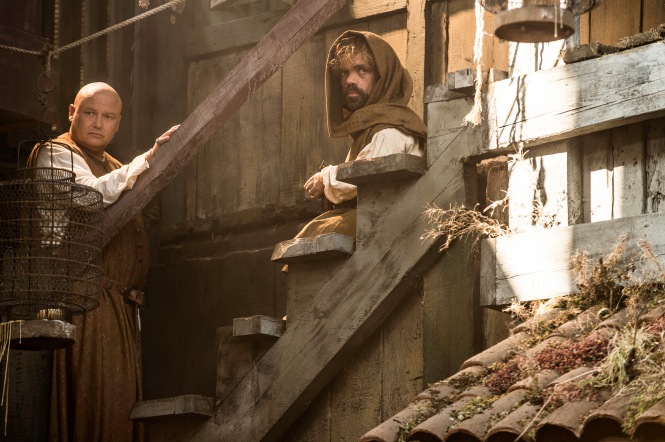 Game of Thrones shares something with Lost in that every episode is required viewing for a follower of the show, not necessarily because of plot developments, but because of character. To be sure, each episode of Game of Thrones features plot developments, as was the case with most Lost episodes, but the heart of the series in both cases is the various ways those developments affect the characters. Plot is meaningless without character in any case, but especially on series like these with ensembles this extensive. My point here is that with shows like these, there are no throwaway episodes; every installment is compulsory viewing if one is going to follow and experience the show in the most optimal way possible.

I say all this to highlight a way in which Game of Thrones differs from some of the other great series of the past fifteen or so years (the so-called “golden age of television”), that being the way that each season and indeed the entire series feels like one big build-up to an ultimate point, climax, or conclusion. I acknowledge that this feeling may be illusory, since we have no guarantee as an audience that this series will resolve itself in any way, and I don’t just mean to the satisfaction of certain audience members in the way that some fans were unhappy with The Sopranos and Lost endings-I mean this in the broadest, most general sort of way.

Despite this, I do get the feeling when watching Game of Thrones that everything is building towards something much larger, and it’s a feeling I never quite experienced while reading the books. I’m inclined to believe this is because the sensation of experiencing the deaths of so many major characters through the more omnipresent point of view of the show as compared to the books nudges one into a sort of coping mechanism that reinforces a belief that there must surely be some larger purpose to this narrative than watching the horrible demise of people you’ve become invested in. As a cynic, I must say that I’m inclined to believe that there really isn’t. It is entirely possible that what we’ve been consuming is one massive story about several players with no coherent or feasible endgame playing the game they’re forced to play.

I am aware that I must be moving well past redundancy and into a realm for which there is no word in my lexicon to describe with this statement, but I must say once again that there really is no precedence for a narrative such as this on television. Just the sheer number of parallel storylines taking place in disparate locations is almost overwhelming. Given that reality, the decision by Benioff and Weiss to deviate so brazenly from the source material on so many major storylines is a decision so brave they deserve plaudits for effort even if they end up falling flat on their faces. A Song of Ice and Fire, in both media is so intricate and interconnected that one false step in any corner of the narrative web could derail the entire enterprise. 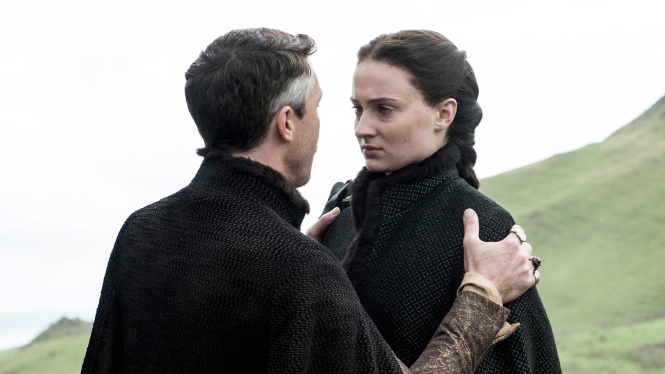 Given all that, I have to say that I’m not entirely sold on the direction they’ve chosen to take the Sansa/Littlefinger storyline. I trust Weiss and Benioff as storytellers and I’m completely fascinated to see where this one goes, but I have to say that at least to this point, I can’t clearly see Littlefinger’s game plan. I do however, see this decision as part of a larger trend or decision of Weiss’s and Benioff’s to make betrothals and marriages in the television version a bit more personal and “closer to home,” so to speak, than they are in some cases in the books. The best example of this point is in Robb’s storyline, where in the books he falls in love with and marries the daughter of a lord who hosted him for a period not featured on the page that we don’t really spend any time with as readers or get a sense of as a character. This worked fine for the books but would’ve presented a number of challenges on screen.

The decision to develop an on-screen love story with a character created for television and feature it front and center in Robb’s storyline worked out beautifully on screen and ultimately made Robb’s demise and The Red Wedding in general all the more heartbreaking and infuriating. The Bolton situation offers a similar possibility to bring a union “closer to home” as it concerns the narrative perspective of the show. In the book, Ramsey marries the Arya imposter who Reek (Theon) knows full well is not Arya Stark. Bringing Sansa into the picture and acknowledging her as Sansa Stark creates a lot of interesting possibilities that I’m excited to see play out.

Staying with weddings, I seem to be less skeeved-out than many by the Margaery/Tommen scenario. As cringe-inducing as aspects of that post-deflowering scene was, I’m not sure what people expected to happen on their wedding night, especially since the age of Tommen (and every other character for that matter) is increased by several years from the book to bring him closer to a more appropriate age for copulation by modern standards. Margaery is plenty interesting in the books, but her status as a non-POV character makes her something of a mystery, so getting to watch Natalie Dormer expertly exercise Margaery’s master-level manipulation on screen continues to be a treat, as are her scenes with Lena Headey. The whole thing may be Oedipus/mother-replacement 101, but it’s still so much fun to watch.

As someone with a great interest in religion, religious politics, and religious power, I’ve very much been looking forward to the introduction of the High Sparrow and the Faith Militant. I’ve admired Jonathan Pryce’s work for a long time and think he’s the absolute perfect choice for the role of the High Sparrow. His screen-presence is really special in the way that he can come off so unassuming externally and yet radiate such command and tension within a frame. He’s a really talented actor.

One final note to which I’ll attach the closest thing I’ll ever do to a “spoiler alert”; it’s worth noting that the performance of beheadings has been a sort of “kiss of death” for Stark men; we first meet Ned in the prelude to the execution of the Night’s Watch deserter, and later in that book/season, Ned looses his own head at the hands of Joffrey. Robb was forced to execute Rickard Carstark for the killing of the young Lannister hostages and later perished in the Red Wedding. Now we find Jonexecuting an insubordinate Janos Slynt in his first major test as Lord Commander of the Night’s Watch. Things may not play out exactly as they did in A Dance With Dragons, but I don’t believe stuff like this is coincidental.