“The Magician’s Apprentice” relates to “Deep Breath,” Peter Capaldi’s introductory episode as the Twelth Doctor in a simalar way to how the Eleveth Doctor’s second season premiere “The Impossible Astronaut” relates to Matt Smith’s debut episode “The End of Time.” In both cases, Steven Moffat uses the episode introducing the new Doctors is a classic Doctor Who one-off episode establishing the new Doctor and his relationship to his companions while using the following season’s premiere episode to tell a sprawling, complicated, and complex narrative that will theoretically make more sense by the time the entire season unfolds. I don’t mean this derisively at all; I trust Steven Moffat as a storyteller and as a showrunner, and I’m encouraged by the connection between “The Magician’s Apprentice” and ‘The Impossible Astronaut’ because Season 6, the season that ‘Astronaut’ kicked off, is my favorite season of the series so far.

Having said all that, while this clearly wasn’t a standalone episode, if for no other reason than it’s part one of a two-parter, this episode exists in the realm of classic Doctor Who visually and aesthetically in a lot of ways we haven’t seen before in the Moffat era or indeed since the reboot. The almost sleek realism that the show has employed to some extant since the Davies’ years and certainly to a great extent since Moffat took the helm and they started shooting the show in HD was in some areas missing from this episode. I don’t know if anybody else has come to the same assessment besides myself and I don’t know if it was intentional or not on the part of the production team, but there was a kind of “extra campiness” to some aspects of the production design and the overall visual aesthetic of the episode, almost as if they had borrowed some set-pieces from the first three decades of the series. 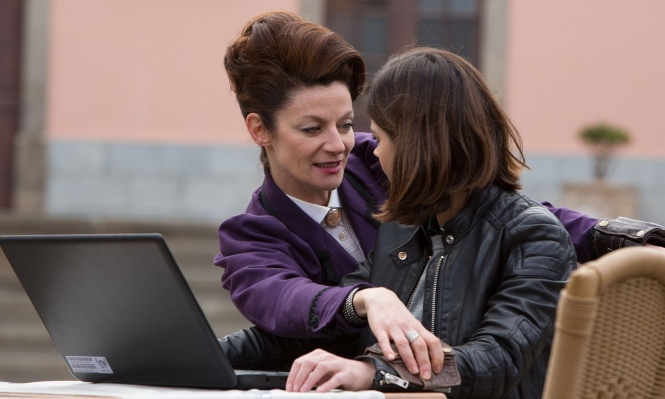 Whether or not this look was intentional, it worked thematically within the episode, where there was a consistent representation of things and the Doctor (ironically, in his case) being “stuck in time,” so to speak. The most obvious example of this was the bit about the planes being suspended in mid-air  by Missy, but it also extended to things like the “hand mines” in the opening sequence, the seemingly perpetual and seemingly futile conflict those mines are employed in and the larger concept of the Doctor and the Master/Missy being locked in an epically long and ongoing conflict that links them and indeed bonds them throughout the passage of time as they experience it in the unique way afforded to Time Lords.

The production design mentioned earlier also lends itself to another strain running through this episode, wherein all time seems to exist all at once, much in the way it did in “The Wedding of River Song” and the end of Season 6. This theme is introduced in the very first shot in “The Magician’s Apprentice” where the seemingly antique plane flies over an otherwise (in some ways) hi-tech battlefield. This is followed up by the anachronism of the Doctor riding a tank and playing an electric guitar in the medieval era he’s holed himself up in. 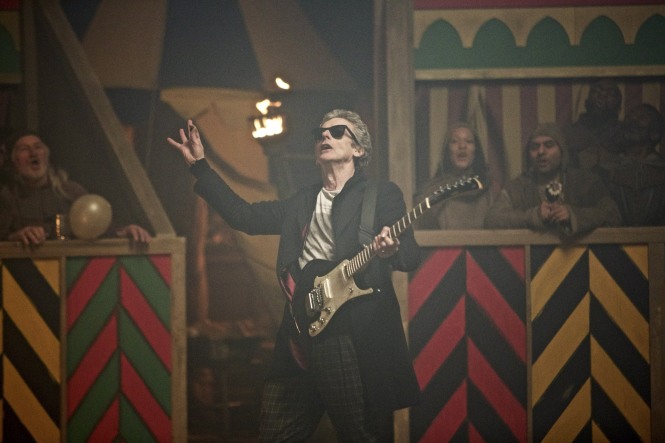 The opening sequence was easily the strongest section of the episode, in my opinion. The sequence on its own was creative and engaging and was rendered all the richer by the reveal of the boy’s identity and the Doctor’s subsequent decision. This tease served as an intriguing introduction to the presumably central question/dramatic tension of the season.

Davros in and of himself is not exactly my favorite “big bad” the Whoverse has to offer, but what’s been set up here is really the most interesting way I can imagine him being featured. The backstory of the Doctor and the Master has a definite Ben-Hur/Messala quality to it and it looks like that will definitely be put into play given that the Master is usually thought of as the Doctor’s arch-nemesis and the central question of this premiere seems to be, “who is the Doctor’s true enemy/true friends?” This obviously puts Clara in an interesting position as a companion as well. There’s a lot to chew on in this episode and I’m interested to see how it wraps up in the continuing episode and in the remainder of the season.