Let’s just get right into it. I always try not to read other pieces on Game of Thrones before finishing my own, but I couldn’t hide from the amount of stuff written about Jaime’s rape of Cersei. Before I begin in earnest, let me be very clear up front that I am not defending rape, the depiction of rape or the use of it as a narrative tool by media-arts producers. As for the latter, I reserve the right, as any viewer does, to question and deride whatsoever I please within any piece of work. I will not do so, however, for the sake of propriety, personal preference, or moral outrage. The works I find to be morally outrageous are those which are wantonly intellectually dishonest or somehow produced in bad faith; I do not find Game of Thrones the television series in particular or A Song of Ice In Fire in general to be such works.

I’ve seen a number of pieces online decrying the rape scene as “unnecessary,” “gratuitous,” or as “going too far.” From the standpoint of sincere, serious narrative, I do not find terms such as these to be especially relevant or even useful in any honest discussion of the issues at hand both inside the narrative and without. It is not necessary for Othello to murder Desdemona, but it is the decision made by Othello within the specific narrative of that play. It may seem gratuitous for Ahab to circumnavigate the globe in pursuit of a white whale, but it is resultant of a series of decisions made by Ahab logical to that narrative. As for “going too far,” that seems to me to be completely in the eyes of the consumer. Everyone has their limits, but I do think it incumbent on consumers of art to push those limits as regularly as possible. 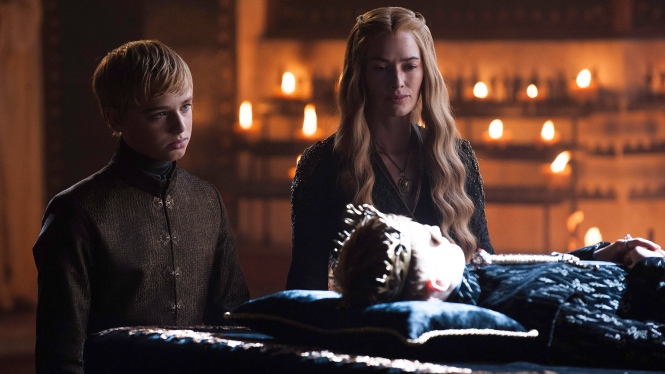 A Song of Ice and Fire is in many ways a series about human behavior at its ugliest that does not shirk in the face of convention or “decency,” which is a huge part of why I love it. Changing what is a consensual encounter in the source book to a rape was a creative choice made by the creative team, presumably in good faith and a decision not come to lightly, as none are at this level. To my mind, the question is not whether or not I or anybody else favor this change. As it happens, I do not, but I am willing to see what affect this has on Jaime and Cersei, because it surely will have. The most reliable aspect of this series is that actions have consequences, sometimes immediate, sometimes far down the road as with the Red Wedding.

Though I don’t personally favor the creative choice, I do disagree with much of the criticism that asserts that it didn’t make narrative sense because I believe it certainly did. The imagery of the act being committed next to Joffrey’s corpse was impactful, resonant, and disturbing. The notion of gratuity, for whatever it’s worth (and to me that’s not much) does not even enter into the equation in my opinion. I’m not in favor whatsoever of using rape as a omnipotent narrative tool used to punish characters or “send a message” to the audience, a la Tyler Perry, but I don’t believe this does that. Depiction of rape alone does not necessarily make for exploitation. Just because something is shocking does not mean it is done strictly for shock value.

Staying on the subject of what is necessary or gratuitous, I have always felt that the overwhelming majority of the complaints about nudity on Game of Thrones were prudish and myopic at best, and at worst completely dishonest, dismissive, and ignorant. From a human-biological standpoint, there is in fact no such thing as “gratuitous nudity”; it is our clothing that is gratuitous. I therefore find criticism of the exposure of body parts we’re expected to keep private on the basis of our puritanical cultural standards that tell us that nudity and the display of specific parts of the human body are shameful to be meritless and frankly ridiculous.

There is something to be said for the male gaze, but I think the use of nudity in Game of Thrones is a great deal more complex than mere objectification and scopophilia. The universe of Ice and Fire does not pretend to be gender-equal; it is not and neither is ours. Women are systematically enslaved and abused in the reality of the books and show. The women “on display” in Game of Thrones are usually those that are displayed as part of their reality dependent on such displays: Dany as a child bride, sex workers, etc. The sole purpose of women in this universe is to produce male heirs. Short of that and being sexual playthings, they are deemed useless and subsequently have very few options in that economy. This a large part of what makes Dany such a powerful figure; she started out as a powerless victim who learns for herself how to gain and assert power derived from qualities that she couldn’t assert previously because of her social reality.

That there is so much less male nudity is reflective and representative of the power dynamics of the universe of the series as well as our own, but the series is aware of this, they are not just a symptom of our rampant misogyny. However effective or legitimate one feels it is, I would argue that Game of Thrones is feminist text. In this way, Oberyn’s explanation and celebration of his bisexuality in this episode was not only excellent on its own merit but also served as a kind of defense (whether or not it “needs” defending, anyway) for the nudity of the series overall. Oberyn appreciates the beauty of the human body and chooses to celebrate it, in this case by indulging in the pleasures of his own body and others. The gaze inversion with the male prostitute here was also very effective, him being the subject of both Oberyn and Ellaria’s gaze.

My favorite sequence in this episode though was the one involving Arya, the Hound, the farmer, and his daughter. Here we see the effects of the war and the Lannister-Baratheon regime from three unique perspectives: a belligerent turned deserter, the common folk who suffer as hapless victims, and the highborn daughter of one of the losers in flight. By posing as one of the “small folk” Arya gets a glimpse of a side of the war she wouldn’t otherwise, that of the victims at the bottom of the political pissing contest her father so detested and paid for with his life. This theme of the common man repeats in the Wildling raid on the village (that looked a little too much like the Shire, but that’s okay). The sequence was beautifully acted by the guests and regulars alike. Rory McCann continues to do great work this season and the ever and increasingly amazing Maisie Williams gets to flex some comic muscles she rarely gets the chance to during the dinner scene. She is by far the best actor under age eighteen that I know of.

Lastly, the Targaryen sequence was as grandiose and satisfying as they usually are. The gate of Mereen looked spectacular and the “sword & sandal epic” scope and scale of this sequence was major even for this series; one doesn’t usually see wide shots like that on television. Emilia Clarke continues to give a performance that in the hands of a lesser actor could potentially be so absurd as to derail the entire narrative with the amount of “pronouncements” she has to deliver. Clarke knows how to assert her presence when it’s time to and the team knows how to capture her doing so as well. Those low angles work every time.

And Little Finger is back! Only good things happen when Aidan Gillen is on HBO.